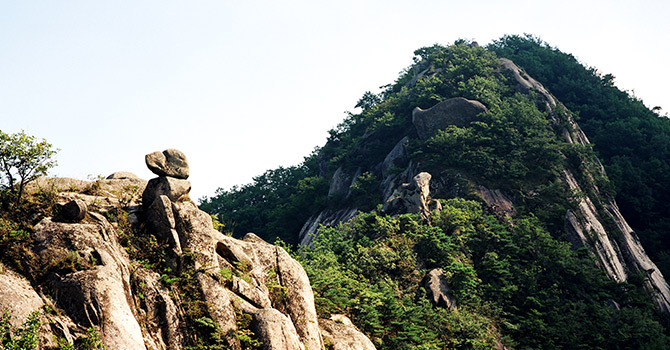 Guksabong Peak, also known as Guksubong Peak, is called Guksibong or Gusibong depending on the region. Guksabong is the highest peak where Guksudang Shrine (or Gukgusindang) was built to worship and honor Guksusin (nation’s guardian spirit; lit. the god/spirit looking over the country), based on one of the guardian-worshipping religions, along with Sansindang Shrine (worshipping of a mountain guardian spirit) and Seonangdang Shrine (worshipping of a village guardian spirit). Around 1950, dishware pieces, an iron horse figure, a model ship and a gold ring were excavated from a rectangular rock at the peak of this mountain. Based on these artifacts, experts believe that there must have been a Guksusindang at this site.

A horse or a ship was considered a symbol of god or a vehicle ridden by god, the reason why objects depicting a horse or ship were placed at the shrine. According to historical records, after designating Hanyang as the capital, King Taejo of Joseon ordered the construction of Guksudang shrines at the top of Bugaksan and Namsan mountains to serve as the “guardian shrines” of Seoul. Guksusin god has been worshipped by Koreans since ages past, and perhaps that’s why peaks called “Guksubong” are found throughout the country. Guksubong Peak in Geumsan had a communication guard post for the army established there in the late 1960s, with five to six soldiers stationed there until the early 80s. In the 1970s, a training facility for reserve forces were set up in Ridge Section No. 2 to 5 behind Dapbakgul Cave, and was in operation for about a decade.