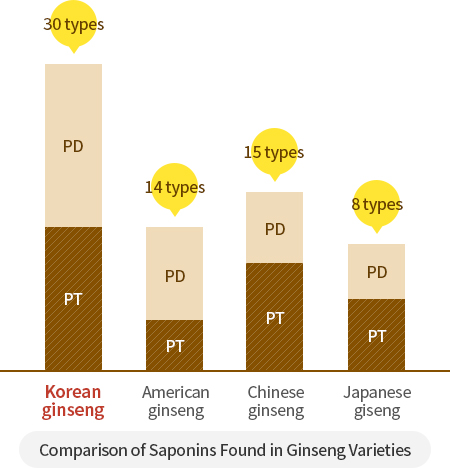 The term, “saponin,” was derived from the Greek word, “sapona,” meaning “soap.” Generally, saponin lowers the surface tension of water and facilitates the generation of foam. For an easier and simpler explanation of its function, think of saponin as a compound that enters the human body and cleans the blood vessels and organs like soap.

There are a wide range of plants that contain saponin

including beans, deodeok, buckwheat, bellflower, water parsley, mung beans, onions, ginkgo and kudzu. However, because saponin compounds contained in ginseng differ from those in other plants in terms of chemical structure, they are called ginsenoside, which is a compound word created by combining “ginseng” and “glycoside,” as a way to differentiate them.

which is a stimulant, and panaxadiol ginsenoside (PD), which is a depressant. Compared to foreign ginseng varieties such as American ginseng, Three-seven ginseng and Japanese ginseng, Korean ginseng in particular consists of more types of saponin compounds and contains a balanced amount of PD and PT ginsenosides, meaning that it helps promote homeostasis by maintaining the blood pressure and body temperature among other physiological factors at desired levels.

Also, during the red ginseng production process, changes are caused to the ginseng composition and this leads to the production of new saponin compounds that are beneficial for the body. For instance, G-Rh2 in red ginseng has anti-cancer properties, inhibiting the growth of cancer cells. It’s been reported that it destroys three times more cancer cells compared to CDDP, which is a powerful anti-cancer drug that is recognized internationally. In addition, it allows physiological detoxification effect in addition to having anti-platelet, anti-oxidant, anti-aging and fat breakdown effects, and it promotes the immune system. So far, there have been no side effects discovered in relation to G-Rh2.