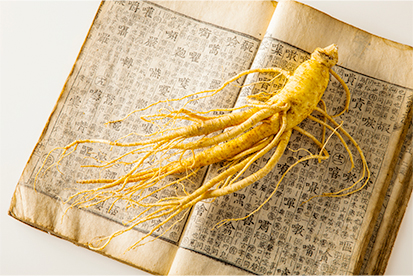 It was recorded that Koryeo ginseng was used as a medicinal ingredient by the private sector 4,500 to 5,000 years ago and spread to China during the Three Kingdoms Period when it was called Young Yak, Seon Yak, Bulocho, etc. / Ginseng was used as a valuable medicinal ingredient in the books "Sang Sang-ron" written by Zhong Jingyung in the Chinese Later Han Constitution Gunan Period (A.D. 196-220) and later "Myeongnyeollok" and "Shinongbongyeong"

Kangcheo Dictionary Theory of Ginseng (The Origin of Geumsan)

The following folktales have been told that the village of Gaean in Seonggok-ri, Nam-myeon, is a place where ginseng opened its eyes of ginseng. About 1,500 years ago, a scholar named Kang lost his father and his mother was sick and laid down. The son, a son of filial piety, prayed earnestly and prayed for the recovery of his mother's illness at the Gwaneum Cave on Mount Jinak. Then one day in a dream, a mountain god appeared and said, "When you go to the rock wall of Gwaneumbulbong, you will find grass with three red berries, so give it root. Then your wish will come true," and then suddenly disappeared.Kang Seon-bi's dream was so strange that when she visited the rock wall she saw in her dream, she recovered her mother's illness and planted the seeds in Seonggok-ri and started growing them. This was the first artificial cultivation of ginseng in our village. The shape of the ginseng was so similar to that of a human being that it was called 人人人蔘.